Signed during their Liverpool Football Club Asia Tour 2011 Malaysia (Malaysia XI vs Liverpool FC). "Whenever we go to Asia, the fans are always amazing," said Liverpool FC captain Steven Gerrard. "The supporters over there are fanatical about Liverpool and it's great that we can give so many of them a chance to come and watch the team play." 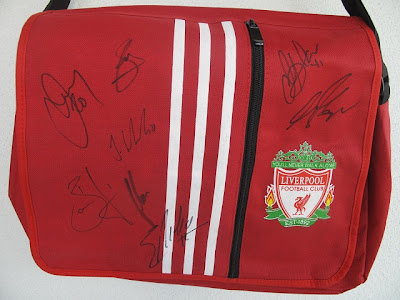 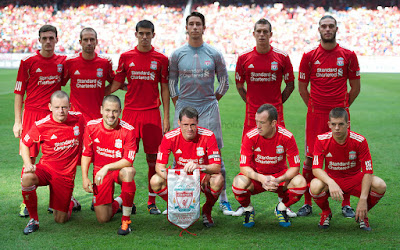 Liverpool players line-up before playing a Malaysia XI at the National Stadium Bukit Jalil in Kuala Lumpur on day six of the club's Asia Tour. (Photo by David Rawcliffe/Propaganda) 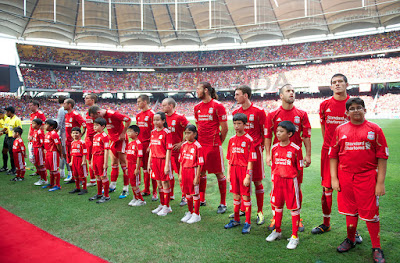 Charlie Adam scored his first Liverpool goal as the Reds recorded a 6-3 victory over a Malaysia XI in Kuala Lumpur on Saturday.

The summer signing from Blackpool marked his full debut for the club with the opener in Malaysia after netting from the penalty spot midway through the first half.

The hosts drew level with a stunning Mohd Safiq Rahim free-kick on the stroke of half-time, however David Ngog's quick-fire second-half double regained the lead for Liverpool before Maxi Rodriguez added a fourth with 15 minutes remaining.

Safee Sali had Kopite hearts in mouths with a late double, but Maxi's late header and a Dirk Kuyt strike ensured the Reds clinched their second pre-season win of the summer.

Adam was handed his first Liverpool start having made his bow for the club in Wednesday's 4-3 victory over Guangdong Sunray Cave in China on Wednesday.

Academy graduate Conor Coady was another debutant in Guangzhou and, having managed to find the back of the net, was handed a starting berth at the sold-out Bukit Jalil Stadium, which was packed with more than 80,000 locals eager to catch a glimpse of their Anfield heroes in the flesh.

With the atmosphere at fever pitch, the action on the field was contested at a more relaxed pace.

Liverpool carved open the first chance of the evening on 10 minutes when Adam's pinpoint pass over the Malaysia defence picked out Andy Carroll in the box. The striker's effort was repelled by the onrushing goalkeeper, Allawee Ramli and Raul Meireles couldn't turn the lose ball goalwards.

Moments later, Adam clipped a free-kick high over the crossbar as the Reds began to threaten the host's goal.

With Liverpool now in the ascendancy, they were awarded a penalty when Carroll was tugged back inside the box by Puttra when attempting to reach another Adam pass.

The Malaysians were aggrieved, but their protests did little to unnerve Liverpool's new No.26, who calmly converted before being asked to re-take by the referee.

No matter, though. Adam retained his cool to dispatch the ball into the back of the net once more.

Meireles then brought a smart stop out of Ramli with a close-range header, but Malaysia drew level three minutes before half-time.

Buoyed by their leveller, Baddrol Bakhtiar headed wide from a dangerous free-kick before Rahim was inches away from netting his second with another set piece.

Liverpool changed their entire XI during the interval and should have regained the lead when David Ngog was sent clear into the right-hand channel of the box, but the striker could only drag an effort wide of the far post.

Then, Jonjo Shelvey's low free-kick had substitute 'keeper Khairul Fahmi Che Mat scrambling across his line, but the ball bounced wide of the upright.

On 64 minutes, Dirk Kuyt jinked his way into the box and slipped the ball dangerously across the face of goal, although Alberto Aquilani was unable to get a touch to steer it into the back of the net.

It had been all Liverpool since the break, and their pressure finally told four minutes later - although there was a touch of good fortune about the manner in which Ngog netted.

Emiliano Insua's cross on the run looped up off a defender and Ahmad's attempted clearance ricocheted into the path of the Frenchman, who was left with the simple task of tapping home.

However, Ngog required no luck when he fired in a second moments later. Collecting Aquilani's pass, the No.24 strode into the area before firing into the top corner.

The Malaysians were beginning to tire and the Reds took full advantage, with Maxi Rodriguez getting his name on the scoresheet.

Aquilani's threaded pass picked out Insua's surge into the area, and the full-back's low cross allowed his compatriot to steer the ball into the goal on the slide.

But when Sali scored following an error by Martin Hansen with 10 minutes left, the spirits of the home side were lifted and the substitute striker incredibly found the target again to set up a tense finale, but Maxi's late second via a header from Kuyt's centre ended hopes of a stunning comeback for the hosts.

Kuyt himself then got in on the act, blasting home deep into added time to seal a 6-3 win.
Posted by frightrice at 12:45 am