World Cup coverage in Malaysia certainly had its humble beginnings.

While it is common knowledge that Datuk Rahim Razali is the undoubted voice of sports commentary in Malaysia, it still comes as a mild shock to hear talk about the events leading up to the World Cup 1982 and the fate of TV coverage for the tournament back then.

“It (Espana ’82) was on RTM and it was the Malay Mail that started it all. For the first time ever, we tried to get the World Cup matches live and RTM couldn’t get a sponsor ... the paper started a campaign and asked all to come up with the funds and the public responded.

“I don’t think they got the full amount but somebody matched the figure that the public gave,” Rahim, 70, recalled in a recent interview. 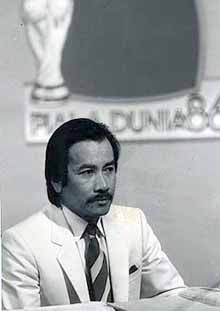 During the World Cup ’86, Datuk Rahim Razali was the only anchor in the RTM studio.

“RTM managed to bring it live ... there were lesser games then (52) and the World Cup was finally on television in Malaysia. Before that, the World Cup intrigued many here, and there was speculation that we might have gotten the 1974 edition in Germany. But nobody managed to screen it all live,” he added.

RTM screened select matches from the 1974 and 1978 tournaments.

Compared to the amount of data that precedes and comes after games now, the 1980s and even a good portion of last decade were pretty thin in terms of information. Back in 1982, Rahim’s job in the studio was confined to introducing the games before handing it over to the commentators from abroad – apart from praying hard that there isn’t a video or audio collapse from the source feed.

Four years later – with a cigarette brand on board as the sponsor – the World Cup ’86 in Mexico took off on a bigger scale. The competition in Mexico was also the year filled with Hollywood drama on the pitch and football players starting to behave like celebrities.

It was also a tournament that lingers longer in Rahim’s memory. He was the only anchor in the studio – the only time this had occurred – and the coverage benefited from proper planning.

“The World Cup 1986 was professionally done. Although 1982 started it off, 1986 was on a bigger scale and that was the famous year of the Hand of the God (incident). Diego Maradona was really somebody ... television (vaulted him) into (global) stardom.” – By Nantha Kumar
Posted by frightrice at 4:03 pm